A start-up that’s making a difference

Sales interns at OWP Pharmaceuticals in Naperville spent their summer experiencing the start-up culture of a pharmaceutical social enterprise.

It was their responsibility to call neurosurgeons to discuss the firm’s branded generic medication for treating epilepsy. And they had another important message to share: half of the profits from OWP funnels to the ROW Foundation, which supplies diagnostic medical equipment and epilepsy medications to developing countries. The two organizations exemplify a new business model of sustainable philanthropy that can address world health issues.

Interns Manilyn Gumapas ’18 (pictured left) and Katie Cotter ’17 communicate to doctors “that it’s the best of both worlds.”

“The branded generic medication is lower in cost for patients, and some of the profits go toward helping people who may not be able to afford prescription medications,” says Cotter, a marketing and management major.

Epilepsy can be a debilitating disease. About 30 million of the 40 million people in developing countries who have epilepsy don’t have access to a proper diagnosis and treatment. Hence, ROW stands for Rest Of World.

Cotter and Gumapas, a sociology major, were the first North Central interns hired by OWP, which is housed in space provided by the College’s Center for Innovation and Entrepreneurship, now called ConVerge. Earlier this year, the company’s cofounder and president, Scott Boyer, connected with Martha Carney, ConVerge executive director. He was about to sign a lease in St. Charles but considered the advantages of locating the company’s headquarters in downtown Naperville. “The synergy with North Central was potentially really good because the College believes in social enterprise,” says Boyer, who spoke about OWP at TEDxNorthCentralCollege in April.

“This partnership is a real asset to North Central and the School of Business and Entrepreneurship,” adds Carney, who has provided counsel to Boyer on Illinois Angel Investor tax credits and other business development issues. “It’s a win-win situation when students are exposed to working for a start-up.” 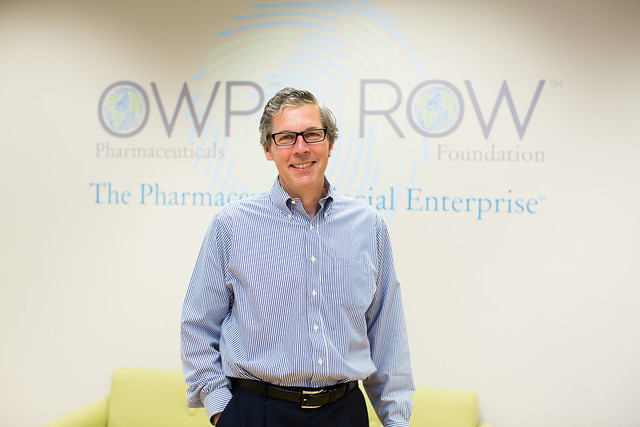 After a 29-year career in the pharmaceutical industry, Boyer had the vision to establish a model for change through responsible entrepreneurship. He was inspired by Tyndale House Publishers in Wheaton, which also distributes profits through a foundation.

“Most pharmaceutical start-ups are funded by venture capitalists who want to sell the company as soon as it starts making money,” he explains. “It makes a few people rich but it results in job losses for everyone else. We’ve built a model that makes it hard to sell our firm; ROW is a shareholder in the company. This model creates the potential for longevity so we can impact patients with epilepsy long into the future.”

The “virtual sales” interns average 30 to 40 calls/emails per day to help educate physicians and encourage them to accept samples of the medication. “We are held accountable,” says Cotter, who will continue her role during fall term. “We have a responsibility to help the firm grow.”

By sharing information about the company, the interns perform “territory warming” in advance of OWP expanding its sales force. Boyer plans to have a nationwide sales force of 55 in two years, up from five currently.

Boyer has been pleased with the progress of the North Central College interns in sharing the mission of OWP. Ultimately he hopes this business model will be replicated by other entrepreneurs. “The whole point is to make a difference and change the world,” he says. “That’s our goal.”

"The synergy with North Central was potentially really good because the College believes in social enterprise."
Scott Boyer, OWP cofounder and president